What the Google Ban on Stem Cells Means for Your Practice 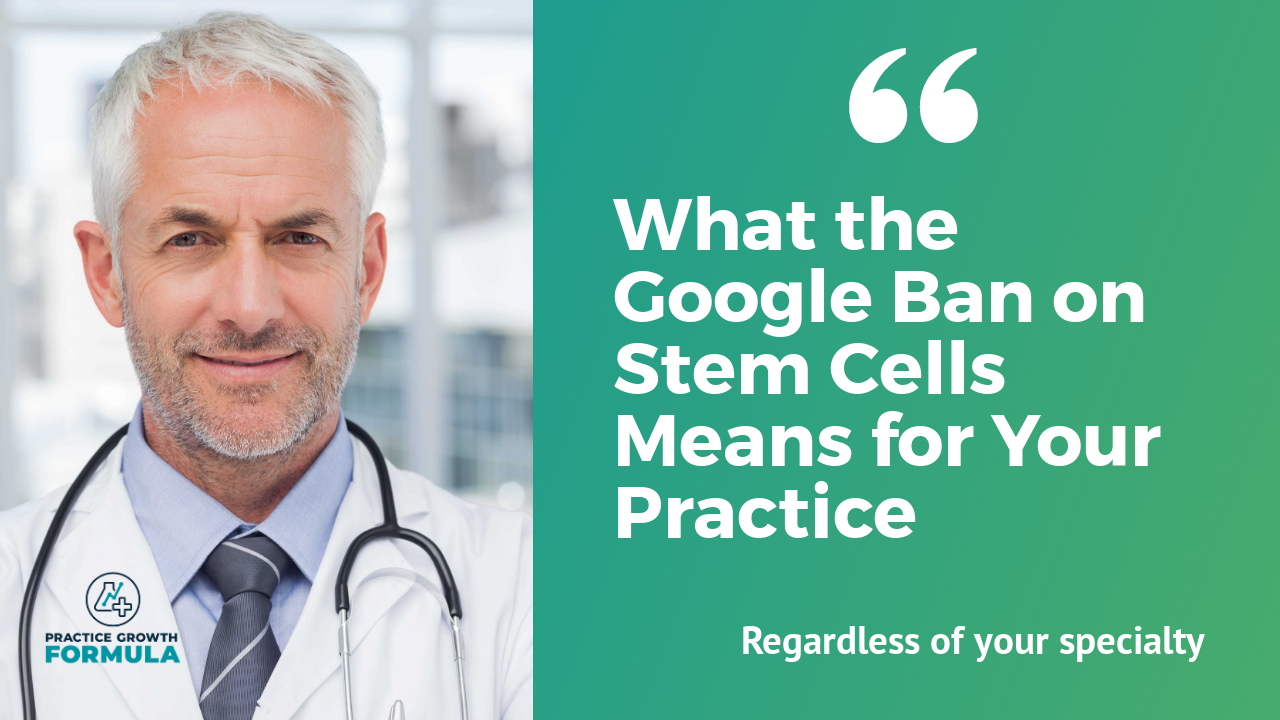 Last September, Google put out a new policy on advertising for speculative and experimental medical treatments.

"…to prohibit advertising for unproven or experimental medical techniques such as most stem cell therapy, cellular (non-stem) therapy, and gene therapy. This new policy will prohibit ads selling treatments that have no established biomedical or scientific basis. The new policy also includes treatments that are rooted in basic scientific findings and preliminary clinical experience, but currently have insufficient formal clinical testing to justify widespread clinical use."

Now, whether you agree with their definition of speculative or experimental treatments is not the point of this article. The point I want to emphasize, –for every practice owner, not just those providing stem cell treatments– is another one.

I believe this is actually a GOOD thing for most practices

If you are a stem cell practice owner, relying on Google Ads for your traffic, you must be thinking I'm out of my mind for saying this.

I know. But hear me out.

In my business I consult with practice owners. All sorts of physicians, dentists, chiropractors, nurse practitioners, and nutritionists who own and operate their own practice(s). In fact, very few of our (current and former) clients run stem stem cell practices.

But in the last few weeks, many of them have expressed their concern with the precedent that this ban is setting and have started to wonder if this ban is the "writing on the wall" for further censorship in advertising their services.

I think they're smart to notice this.

And so before I tell you why I think this is actually a good thing for small practice owners, let me explain this idea of the gatekeeper.

Google has become the gatekeeper

In a previous era, if you wanted to get to consumers, you needed to go through gatekeepers who decided whether or not you could reach them. And at what price.

For example, if you wanted to buy a billboard, there were a finite number of billboards available and the owner of the billboard decided whether it let you rent that space.

Same thing with airtime on TV and radio. You had to convince the gatekeepers to let you rent space in their shows to advertise.

But then the internet came along and the gatekeepers were no longer as relevant. Because you could reach your potential clients (i.e. patients) through incredibly detailed targeting methods for pennies. You no longer had to throw a wide net to try and catch everyone's attention in hopes that a few would be interested in what you had to offer.

Instead, you now were able to pinpoint the exact characteristics that the person seeing this ad had to have. You could choose where they lived, how old they were, what they like, and so on.

And through Google, you could now position your ad right in front of people who were searching for exactly the kind of thing or service you offer.

Then, Google realized that they could have a bidding war between you and your competitor. And so, when your competitor came along and they wanted to reach your potential patients, Google told them that you were already doing that for a penny. But that if they gave two pennies instead, they could get to that audience ahead of you.

And so it began.

Your cost to be in front of your audience went from 25 cents to 2 dollars almost overnight. And it has kept on climbing. Which is, a lot of times, still better than buying massive advertising, but no longer cheap.

And that was all part of a free market. Supply and demand. And, while it may be disappointing -and upsetting- for many, it is understandable.

However, when you're no longer able to even bid for that space, it is a problem. Especially if that's your main source of traffic!

It is the precedent that is most concerning.

First, lets be clear that this is not the first time that Google has banned a specific term or topic from buying ads in the search results.

It's happened before in Real Estate, in the Multi-Level Marketing Industry, Financial Services Industry, and a few others…

But the reason it's worrying for health providers is that it shows how Google can (and often has) turn off your source of revenue overnight. Simply because it does not agree with what you are doing.

And here's the thing. Most practice owners that I work with have gone into private practice because they want to practice on their terms. They dislike the way the healthcare system is designed and have decided to stand against it.

And so we have functional medicine doctors who are the ones treating conditions that are not "accepted" in the "medical establishment" like leaky gut, food sensitivities, adrenal fatigue, etc.

We have physicians who are addressing (and reversing!) obesity, diabetes, high blood pressure and metabolic syndrome with diet and lifestyle modifications instead of throwing more and more drugs at their patients (how dare them!).

Not to mention the incredible potential that stem cell therapeutics hold in many fields. Just think of the most common one, orthopedics. The recovery time, rate of complications (minor and serious), quality of life and several other parameters are overwhelmingly superior than the standard surgical approach…

And now stem cell providers have lost their ability to advertise on Google. And the rest are realizing now, that they don't know when (no longer if) Google will decide to arbitrarily stop allowing them to reach their audience.

That's what's worrying about it.

But… Where's the good news?

While we can all disagree with arbitrary censorship, especially as it pertains to the practice of medicine, the truth is that this advertising ban actually helps you and your private practice. Because you would otherwise not be able to compete head to head in terms of advertising dollars with some of your larger competitors.

So now, with a more level playing field, you have a better chance to get noticed.

By creating a brand. By serving your patients better. By growing your platform and building a following. And by doing all those things that inspired you to go into private practice.

How you do those things, is up to you. But know that the opportunity you are faced with right now, is not going to last much longer. Sooner rather than later, your competitors with the deeper pockets will find a way to get a leg up in this contest for your audience's attention.

I know you've been hearing for years that you need to create a brand. But most doctors that I talk to haven't really done so… Maybe you started doing it at some point, got a new website, created social media profiles, even hired a community manager (I still remember when that was an actual job in and of itself…).

But the truth is that a brand needs to be created and then nurtured. Anyone can plant a seed. But it takes time and commitment to water and care for it until it grows and flourishes. And even then, it still needs to be cared for.

So I wanto you to read this as the final warning. If you don't build a brand -for you and for your practice- you will not be able to compete in 2020 and beyond.

You can agree or disagree with this but very soon it won't matter how good you are as a doctor, if you have not built a brand, you simply won't exist in the marketplace.

So get started today!

If you're looking for a reputable company to help you build your brand, connect with me on LinkedIn and I'll be happy to provide a referral.

And don't worry, I'm not going to pitch you; brand building is not something we do at PG Formula… Unless you wanted to create your own podcast.

At Practice Growth Formula we help you build your dream practice.

Whether you're starting out, taking over someone else or been in practice for years, we can create the roadmap to take you from where you are at to where you want to be.

Ready to take the next step?

Want to know how your business skills stack up?

Take our Practice Diagnostic Quiz and find out!

DONE FOR YOU SERVICES

Enter your details below and we will send you everything you need to find out if we're a good fit for you and your practice.